History of the practice

Bae Kim & Lee is one of South Korea’s oldest law firms – even though it was only founded in 1980. It was, according to its website, also one of the first Korean firms to set up a department specialising in bankruptcy.

The 1997 Asian financial crisis propelled it into the limelight as one of the leading Korean firms in this practice area, ensuring it had a role on all domestic bankruptcy-related cases whether for the debtors, creditors or related third parties.

The 20-strong team includes both lawyers and certified public accountants, who work together to take a corporate business-led approach on legal matters relating to distress.

Bae Kim & Lee has offices in Beijing, Shanghai, Dubai, Hong Kong and Yangon in Myanmar (opened in June 2016), but its bankruptcy and restructuring lawyers are all based in Seoul.

The firm’s bankruptcy and restructuring clients are generally major Korean companies active in everything from shopping centres to food, media, telecoms and electronics.

The car industry in particular appears to have provided Bae Kim & Lee with a steady stream of work: key partner Hyun Wook Park has handled the corporate reorganisations of Samsung Motors and Kia Motors, while the corporate restructuring group also worked on the acquisition of distressed auto manufacturer SsangYong Motor by India’s Mahindra & Mahindra.

Bae Kim & Lee has recently been acting for Korean shipbuilder STX Offshore in rehabilitation proceedings in Seoul filed in May 2016. An English court recognised the case as foreign main proceedings that June, and a Texan court did the same in October, preventing the enforcement of arbitral awards worth US$40 million against the company.

Founded in 1980, Bae, Kim & Lee LLC is among the largest law firms in South Korea with over 500 professionals. Headquartered in Seoul, BKL maintains overseas offices in Beijing, Shanghai, Dubai, Hong Kong, Hanoi, Ho Chi Minh City and Yangon. As the first Korean law firm to set up offices in China and the UAE, BKL has pioneered a region-wide approach to legal services.

With over 20 practice groups specializing in every significant area of law for business, BKL delivers expedient advice and resourceful advocacy across a broad cross-section of industries, guided by a clear understanding of the commercial needs of our clients.

As the first law firm in the nation that set up a department dealing with bankruptcy-related matters, BKL has since even before the 1997 Asian Financial Crisis taken the lead in almost every domestic bankruptcy-related case where either it successfully led the bankruptcy procedure on the side of the relevant company or faithfully represented client’s interests on the side of the relevant creditors and other stakeholders-indeed.

Currently comprised of about 30 professionals, including attorneys, certified public accountants and dedicated researchers, BKL Corporate Restructuring Practice Group has provided its domestic clients with widely-recognized legal services for dealing with all tasks related to the bankruptcy and corporate restructuring process. Furthermore, as a member of the World Law Group, BKL has been frequently collaborating with law firms across the world, becoming a go-to firm in Korea for this practice area. 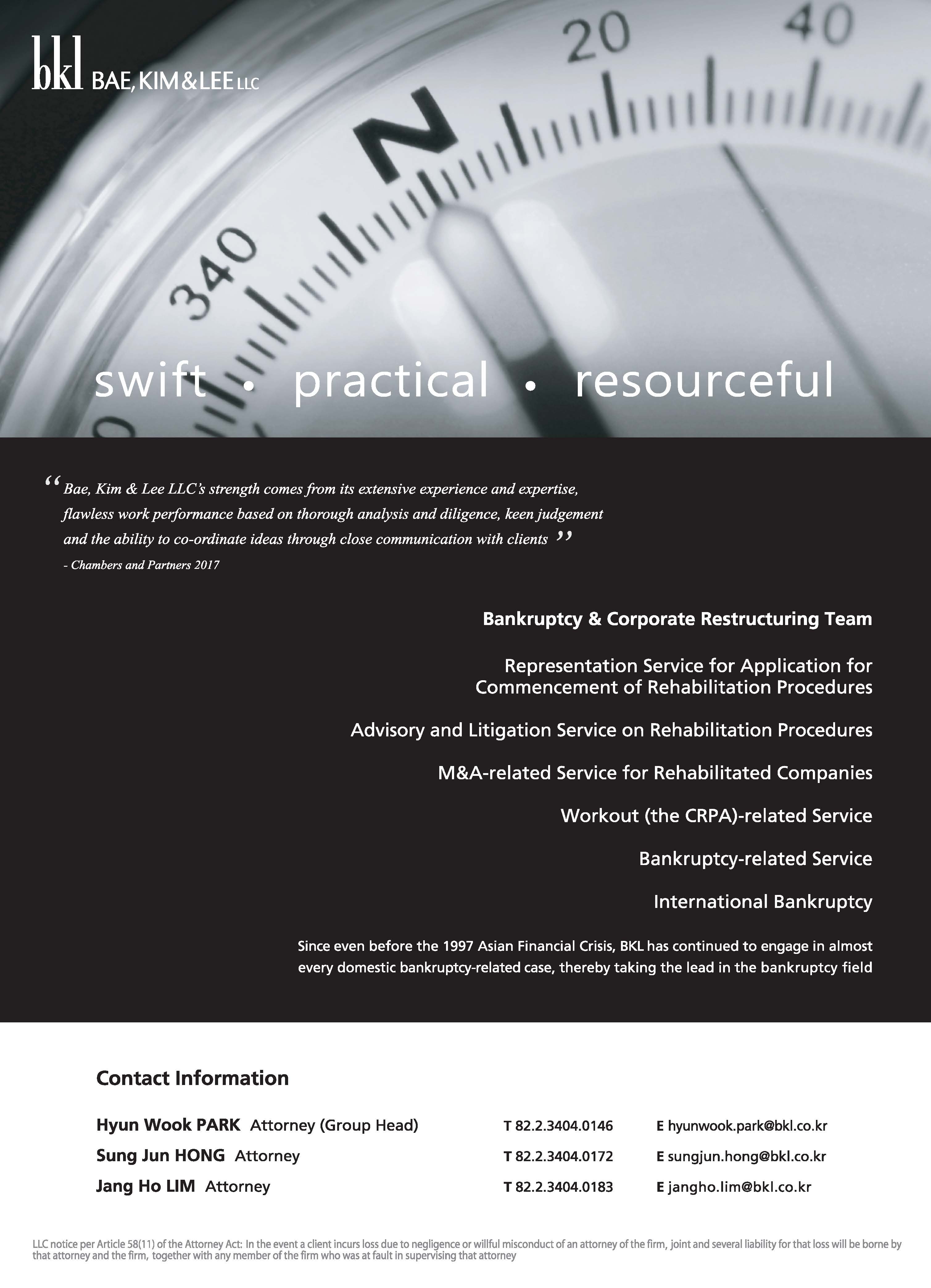