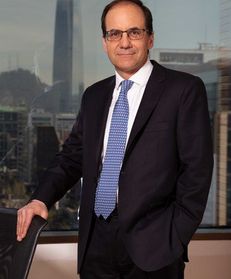 Cristóbal Eyzaguirre specialises in commercial arbitration and litigation, corporate, banking and financing matters, mergers and acquisitions, syndicated loans, capital markets, project financing, debt restructuring, bankruptcy, private equity investments and antitrust. From 1997 to 2003, he served in various senior positions at Citigroup, including managing director, general counsel and compliance director of Citigroup Latin America (based in Florida), general counsel of the Global Corporate and Investment Bank of Citigroup Latin America (based in Florida) and general counsel of Citigroup Chile (Santiago). Previously, he was with Shearman & Sterling, New York, from 1994 to 1995. He was elected in a survey conducted by Revista Capital among the General Counsels of the largest Chilean listed companies as the best Chilean lawyer in years 2010, 2011 and 2012 (the survey was discontinued that year). He has also been chosen as one of the leading Chilean practitioners in litigation, antitrust, banking and finance, arbitration and mergers and acquisitions by Chambers and Partners. He is professor of civil law at the Pontifical Catholic University of Chile Law School. Previously, he was professor of the masters in business law at the Pontifical Catholic University of Chile Law School (teaching bankruptcy and debt restructuring) and at Universidad de Los Andes Law School (teaching shareholders agreements and corporate directors' liability). He is a board member of the nonprofit organisation Sociedad Protectora de la Infancia. He joined Claro & Cia in 1988 and has been a partner since 2004.