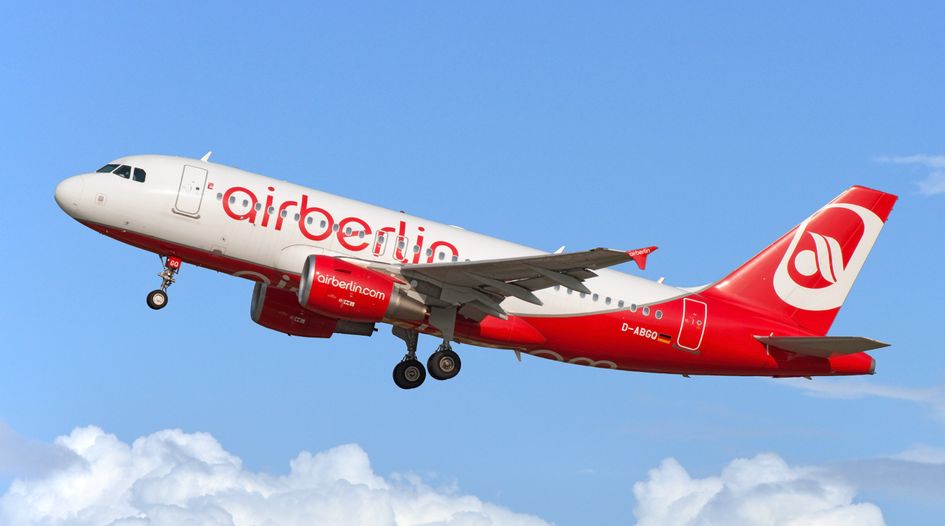 Air Berlin’s administrator must face an English challenge to his €2 billion German contract breach claim against Etihad Airways, after a London appeal court ruled that EU law allowed the dispute to be heard in England under an “asymmetric” jurisdiction clause.

On 18 December, a three-judge bench in the England and Wales Court of Appeal, unanimously refused to stay an action brought by Etihad in England, in which the Abu Dhabi airline is seeking to void a German breach of contract claim lodged by Air Berlin administrator Lucas Flöther.

The judges found the contract conferred exclusive jurisdiction to the English courts under article 31 of the Brussels Recast Regulation, as it came with a loan facility agreement that had an English-law clause.

The appeal court concluded that the English-law clause, which Flöther called “asymmetric” because it was exclusive for one side and not the other, constituted such an agreement and meant Etihad had seised the English courts before Flöther filed his claim in Germany.

Flöther sued Etihad in Germany in December 2018, accusing it of breaching an April 2017 “comfort letter” in which it had agreed to fund Air Berlin for the ensuing 18 months. Etihad provided the letter alongside a €350 million loan facilities agreement, which contained the English-law clause.

In January 2019, Etihad tried to have the case transferred from Germany to England by asking the High Court in London for a declaration of non-liability. It argued the English court had exclusive jurisdiction because the letter and agreement were part of a “support package”, which should be taken together when ruling on jurisdiction.

Flöther asked the High Court to stay Etihad’s application, arguing the jurisdiction clause in the agreement did not apply to the letter. It said the recast regulation required the dispute to be heard in Germany, as it was first heard there.

But the High Court dismissed the stay motion in November last year, so Flöther took his case to the Court of Appeal.

Meanwhile, Etihad secured a stay of Flöther’s German claim in May. A Berlin appeal court upheld the stay on 3 December, keeping it in place until the London court reached a decision on whether it had jurisdiction over the dispute.

Etihad’s solicitors, Shearman & Sterling, provided the English appeal court with an unagreed translation of the Berlin appeal judgment. The translation purportedly showed that the Berlin court refused to refer the dispute to the Court of Justice of the European Union (CJEU) for a preliminary ruling, but allowed Flöther to appeal to Germany’s highest court.

The Court of Appeal found there was nothing in the wording of article 31, or in a related recital to the regulation, to suggest that asymmetric jurisdiction clauses are excluded from its scope.

The court rejected Flöther’s arguments that a related section of the recast regulations, article 25, and EU case law differentiate between choice of jurisdictions agreements that are fully exclusive for both parties and those that are not, such as asymmetric agreements.

The judges noted that the CJEU has repeatedly emphasised the importance of respecting the autonomy of parties that enter into such agreements.

They added that the purpose of article 31 was to reverse a much-criticised 2005 decision of the CJEU, Erich Gasser GmbH v MISAT Sr. In that decision, the CJEU found an Austrian court had to defer to an Italian court on an action filed in Italy first, even though Austria was named in an exclusive jurisdiction clause.

The court was prepared to accept Flöther’s arguments that the Hague Convention on Choice of Court Agreements probably does not apply to asymmetric jurisdiction clauses. But it said it did not need to consider this point because it had reached a clear definition on the scope of the recast regulations, which do not explicitly refer to the Hague Convention.

The judges rejected Flöther’s argument that the English court had not been seised, finding that Etihad has seised it on the basis of the exclusive jurisdiction clause.

The court also refused Flöther’s request to refer the matter to the CJEU, as it felt it was clear enough that article 31 applied to its dispute with Etihad.

It added that no other court had referred to the CJEU when considering the application of article 31 to asymmetric jurisdiction agreements. It noted that the Berlin appeal court had found the same way, while the English High Court and courts in Greece and Spain had also reached the same conclusion on other cases.

An Etihad spokesperson tells GRR: “We welcome the Court of Appeal’s decision, which accurately reflects the intentions of Etihad and Air Berlin regarding jurisdiction, and we remain confident of prevailing on the merits of the case.”

Flöther’s spokesperson says: “The insolvency administrator remains convinced of his legal opinion: Air Berlin is a German airline with its legal and actual registered office in Berlin. The court proceedings against the shareholder Etihad belong to Berlin.”

“The insolvency administrator will discuss the options with them and with the process financier before Christmas,” they add.

In the Court of Appeal of England and Wales

*retired from practice in December 2019